It was going to be great: I was going to read my new book, Pretty Woman Spitting, watch in-flight movies, design and lead a challenging, calorie-burning, confined space workout for the entire plane, interview and photograph everyone on their thoughts on HK and the US, update the blog and start a non-profit for… something with animals. Or people.

16 hours seems like far less. I’m not joking. I read maybe a third of that book, watched Young Adult with Charlize Theron, fell asleep watching The Way We Were with Robert Redford, slept for 4–5 hours straight, and interviewed one person: Jenny, age 17. 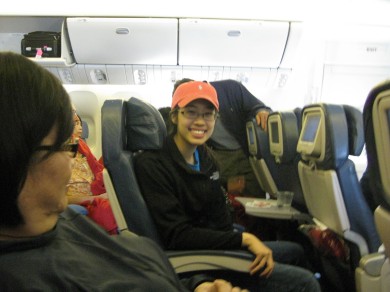 Jenny’s a first generation American hs senior who works at her parents’ Chinese restaurant in Northern Mississippi. She’s traveling with her mom, dad and aunt through mainland China for 3 weeks.

Favorite things about HK: the clothes shopping and technology/gadgetry. Apparently there’s this “music box” changes the equalization/acoustics of music, depending on the surface you put it on. (wood versus metal, for example.)

Favorite things about the US: variety of food.

Least favorite things about HK: the walking. Which says a lot coming from a member of her track team. (Jenny, don’t visit San Francisco…)

Least favorite thing about the US: Being compared to other Asians. The pressure to be “smart” because of her appearance. And finally, conversations like these – which she’s apparently had repeatedly:

Jenny’s been to mainland China enough times, so I decided to ask her about the bathroom situation. I’d just read chapter 7 of Pretty Woman Spitting, which described a most horrific, nauseating, description of toilets across China. Jenny said, “That’s disgusting. I’ve never heard of that.”

So take that, author of that book about China. Quit trying to scare people.

On a related note, if you’re not getting enough gross-out humor from Tosh.0 or the latest Bridesmaids-type movie, check out the “Mind Over Bladder” chapter in Pretty Woman Spitting.

3 thoughts on “High hopes for the 16 hour flight”