Moving’s not so bad when all you have is this: 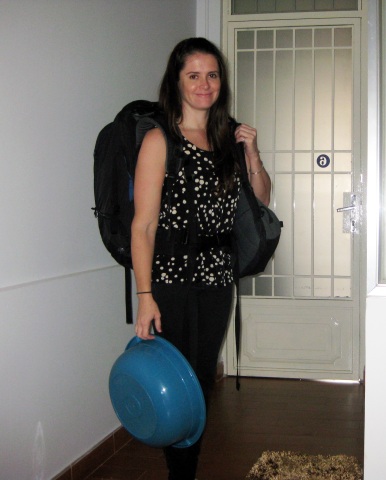 That’s everything I have here in Vietnam. The blue tub’s for doing laundry – I just hand wash everything. Much cheaper, clothes last longer and I don’t have that many clothes anyways. I don’t plan on bringing the blue tub with me to Austin in February, but if one of you wants it, speak up! 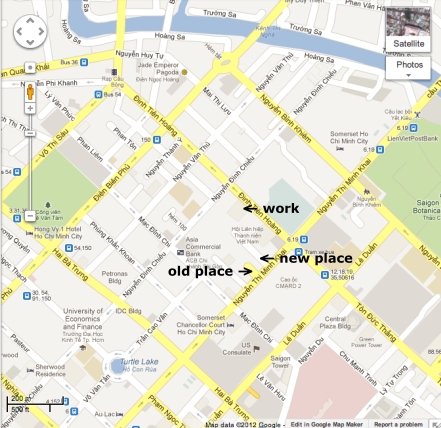 G’bye mediocre place! I wanted to leave the other place for several reasons: I couldn’t see out of the window or even open it, the internet was terrible, I was on the top floor (75 steps) and it was a ittle icky. I can’t pinpoint the exact ick; there was mildew in the bathroom and the desk was rotting.

I can see my old alley from my window! Check out my new place: definitely seems cleaner, half the stairs to my room, the internet’s the best I’ve encountered in Vietnam so far, and as a bonus, it’s $30 cheaper a month (at $230.)

New alley. Even though it’s way busier than my last alley – so many restaurants, people, stores, etc. – I can already tell my room’s going to be quieter. See, my old room faced this busy alley and my new room faces my old alley. 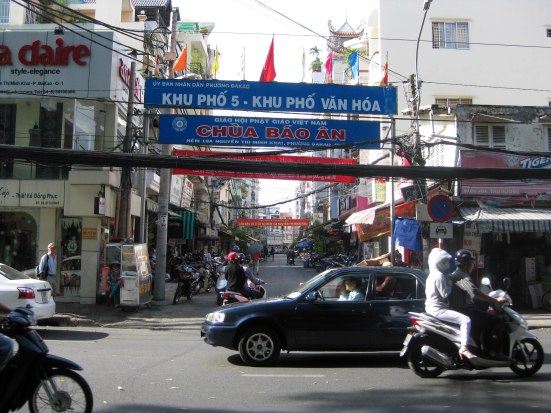 See the gal on the moped covered head-to-toe? It’s not 50 degrees outside – far from it. Closer to 85. She doesn’t want her skin to tan. Even on the hottest days, most girls I see are totally covered when they’re outside. Like the umbrellas in HK.

Guard Cat. Got great news this morning! My bag made it to my friend’s place in HK. He said the cat’s been guarding it and won’t let anyone near. As I was leaving Singapore, I had to decide what to do with some of my extra stuff. I could either mail it someplace, abandon it, or lug it around with me for 2+ more months. Of course, back then I thought I’d be traipsing all over wherever. If I’d known I’d be staying in HCMC, I would have made the same decision. Airline baggage costs versus postage costs. A wash at best. Look at the beauty: 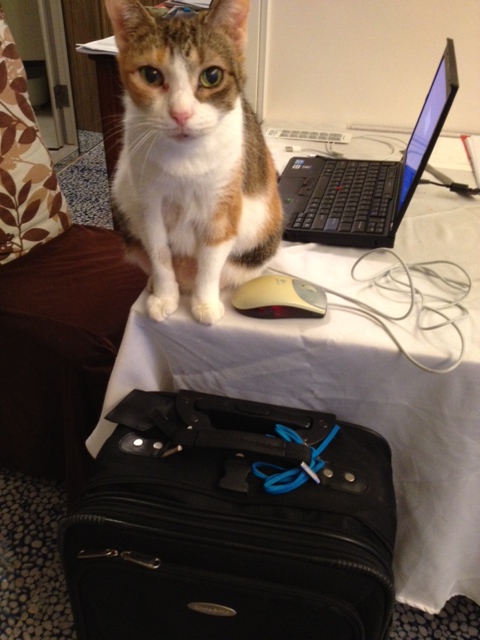 “Where do you live?” It shouldn’t be a hard question, but I never know what to say. Technically I live here in Vietnam, but can you “live” someplace for 2-3 months? I don’t live in Ohio anymore – none of my stuff is there. The rest of my belongings are in a storage closet in Austin, where I haven’t lived since the late-1900’s. I need a soundbite-answer for this common question.

3 thoughts on “Relocation: Let’s see what the next alley over is like”