Because WordPress sucks here, that’s why. If it’s the crappy internet, then why are gawker, reddit, and all the other awesome sites on the interwebz lightening-fast? More times than not, when I go to click “publish” I get this:

That’s just the beginning. In case anyone is “Why you using Chrome?” BECAUSE. Everything else (safari, firefox) suddenly became an old version so I downloaded the new versions and guess what? My OS (Mac 10.6.8) can’t support them, so I paid $20 to get the new OS from apple and guess what? After 8 hours of downloading, apple’s all “Looks like your internet connection’s too slow.” YOU THINK?? And yes, I’m plugged into ethernet, I tried another network and I tried this at home. It’s even worse at home.

Am I not allowed to be annoyed by anything ever? And yes, these are my “first world problems“, but I promise to let you know if I develop scabies, scurvy or any other diseases beginning with “sc”. (Last night I was complaining to a friend about how I don’t like my entire bathroom getting wet when I take a shower –why don’t they just put clever walls around the shower-area?? And he was all “first world problems.” Yes, all my problems are first world problems… AND? I’m not supposed to be irritated by a perpetually-drenched bathroom, coworkers skating around on their flip-flops, coughing on me and bumping into my chair all day?? ALL I HAVE ARE FIRST WORLD PROBLEMS.)

Good news / bad news. My contract here in Saigon/HCMC got extended until January 30th. The job’s going well – I can’t remember the last time I had a creative director who really knew what he was doing. So that part is great. The bad news is you won’t get to see the rest of Vietnam just yet. The good news is that I won’t run out of money just yet. I had no idea I’d find work here, so my original plan was to work my way north through Dalat and Nha Trang, on to Hanoi, Sapa and Halong Bay.

Ok, let’s see if this posts…

Looks like it indeed posted, but check out what I stared at for 5 minutes after: (And this is with an ethernet connection.) 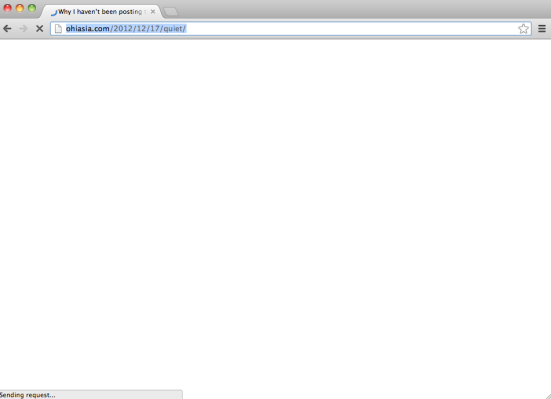