Last Monday proved to be unexpectedly eventful. My Jersey friend, Sophie, and I went to grab some pho lunch close to the hostel. While we were eating, we witnessed something neither of us had ever seen before. A slack-jawed guy in a security-type shirt was staring steadily at a run-of the-mill moped for at least 20 minutes. Once in awhile he would reach out and rest his hand on it.

As we watched him, we developed and debunked several theories as to what was going on.

theory #1: He’s high as hell. It’s not hard to imagine someone smoking a bunch of weed, then staring at something – anything – steadily for a half hour or longer. But this guy seemed too grounded to be that out of it. He wasn’t in a stupor, he was transfixed!

theory #2: He’s a cat. Have you ever known a cat who will stare at a blank spot on the wall for a really long time? That’s what this guy was doing.

theory #3: Someone told him, “Hey man, watch my bike for me, will ya?” And he took it very, very literally. 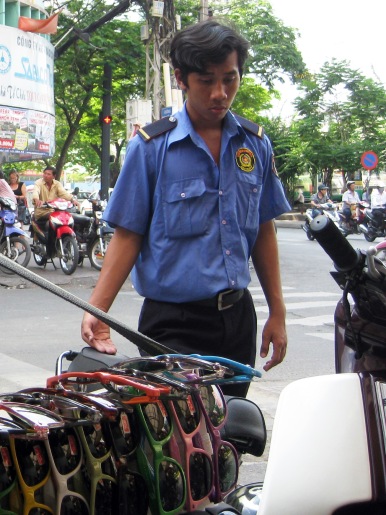 It certainly wasn’t hard. He wasn’t paying attention to us and he was in basically in the same position the entire time we were eating. As you look at this photo, imagine that it’s a half-hour time-lapse. (The rack of sunglasses are being held by some guy trying to sell Sophie sunglasses while she was wearing her own sunglasses.) 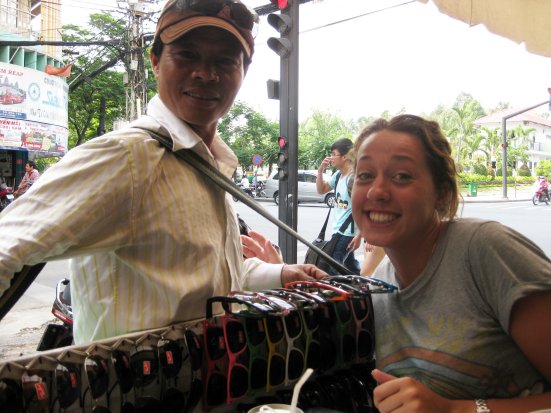 At some point, we started talking to the guy seated behind us, Binh. He’s visiting Vietnam for the first time since he moved away as a child in 1983. He’d also been watching the slack jaw’s staring contest with the motorbike and was short on explanations.

Binh grew up in SoCal, went to medical school and is now a family practice doctor in Las Vegas. After our lunch, we walked all over HCMC with him. He claims that his Vietnamese is rusty, but it sounded good to us.

Masks. Lots of people here wear fabric facemasks because of the pollution, especially when they’re on their mopeds. Binh said they doesn’t actually help anything, but bought us each a mask for good luck. By the end of the day, I’d be a believer in our lucky masks.

Roosters. A chicken and a rooster were hanging out near where we took a break. Cock fighting’s big here and our feathered friend here is apparently a regular in the ring. (Poor bird.)

We got so much done with Binh: exchanged some Hong Kong money to VND, Sophie bought a sim for her phone, we bought postcards, and went out for dinner. Sure, she and I could have managed all this with English, but it was muuuch better in Vietnamese.

Some pics I took throughout the afternoon:

The Luck. We stopped by the travel place and paid for my trip with the German girls to the Mekong Delta, to leave early Wednesday. When I got back to the hostel and checked email, I found out I had a new job starting in the morning!

I’d met with 2 agencies when I first got here, but it was more info-gathering /meet-greet than a real interview, I thought. Actually, I didn’t think the CD offering me the job had liked me all that much! Goes to show… something.

Binh says we 3 have to keep the masks forever, as they’ve proven to be good luck. Guess I can’t argue with that. Next time you see me, I’ll be the one with the mask.

Lucky Monday was actually last Monday – I’ve gotten slightly behind on posts. Since then, Binh’s been traveling through Vietnam, but gets back to HCMC today. I plan on doing an interview with him, so if you have questions for him, post in the comments or click “contact” at the top.