Sophie’s the only one in the hostel who’s been here as long as me. We’ve been hanging out for about 2 weeks now. Just today she moved from the 5-person dorm room upstairs to the single room next to me, so we’re neighbors! She’s from Jersey, an island 14 miles off the coast of France, and a place that baffles me. It’s not part of the UK or the EU, but Britain is sort of responsible for it. Here, see if you can make sense of it.

Today I hung out with her and a Danish guy, Anders, and tried to cobble an interview together.

How long will you be here in Vietnam and what brought you here?

Anders: I took 3 months off my data management job in Denmark to visit Vietnam, Thailand and Malaysia for one month each. I want to push myself out of my comfort zone and see a bit of the world; break the comfort bubble I was in, and discover new skills and strengths by doing things I wouldn’t normally do.

In each country I’ve planned to do something that scares me a little. Here in Vietnam, I rode a motorbike for 11 days, from Hoi An to Saigon (540 miles) with easyriders. In Thailand, I’m taking a 3-day PADI diving course, then 4-day boat trip sailing and diving around the Andaman Sea through Dive The World. (I’m not a strong swimmer, so diving isn’t something I’d normally do.) Finally, in Malaysia, I’m climbing the tallest peak in Southeast Asia: Mt. Kinabalu in Borneo. It’ll take 2 days to reach the 4,200m peak.

Sophie: I’m here indefinitely – maybe a year. After I finished Uni, I knew I wanted to travel a lot. I don’t like winters in Jersey, but I have a summer job there. First I was an English teacher in Indonesia for 2 months, then a diving instructor (PADI) in Honduras – the murder capital of the world. Actually, just last week a boat captain got killed by pirates on the island where I stayed, Utila.

I like the idea of alternating between Asia and Central America. I’m planning on being in Brazil for the World Cup in 2014 and the Olympics in 2016. The London Olympics had such a great atmosphere and I want to support England (even though I’m not English.)

What do outsiders think of where you come from?

Anders: Lots of people think Denmark is the capital of Sweden. My taxi driver in Istanbul, several Vietnamese here and some guy asking for change in San Francisco all thought so.

Sophie: People who actually know about Jersey, just know about our cows and that we’re a tax haven.

What do you think about the US?

Sophie: I met a number of Americans in Honduras. They were pretty stereotypical: talking about themselves and not really curious about anything around them. They had a lot of money and talked about that. Actually… maybe they were just stereotypical of a type of rich person from anywhere.

Anders: That reminds me, I was once on a small bus tour in Scotland – riding through beautiful scenery and landscape. There was an older American guy on the bus who spent the whole time talking to the bus driver about himself and where he was from. This was a 2-hour bus ride and he basically missed all the scenery. 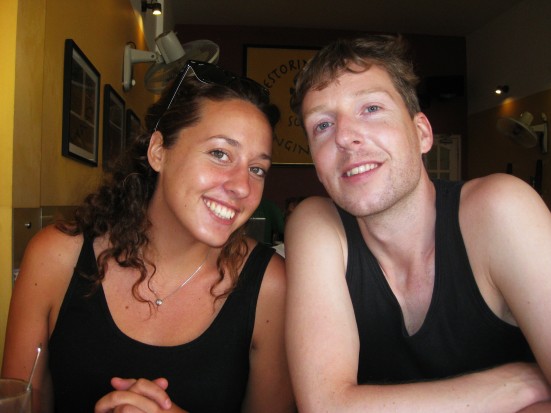