I’ve never watched war movies, so I have no idea how much of this is common knowledge. (Probably a fair amount.) For me, it was all new information.

We took the road that 9-year old Phan Thị Kim Phúc was on in that famous photograph, to Củ Chi to check out a small section of the over-200-km of connecting tunnels that 16,000 Viet Cong guerrillas lived in for 20 years.

Just inside the entrance, was a room displaying various guns and weapons. I don’t know one from the next, but here’s a pic: 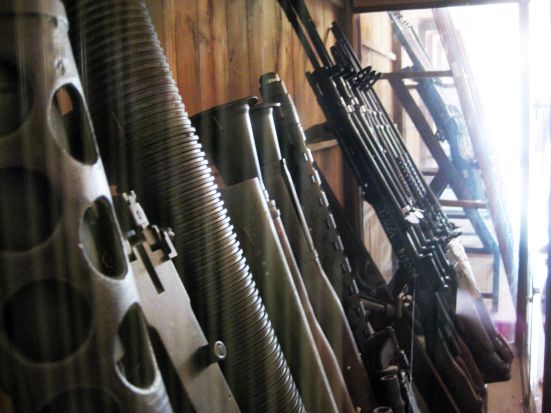 Documentary We started out watching an old, 15-minute black-and-white documentary from inside an old fixed-up old trench. The narrator spoke English with a Vietnamese accent and explained that “like a crazy batch of wild devils, they fired into homes, into schools, into chickens, into the earth, and even into temples…” 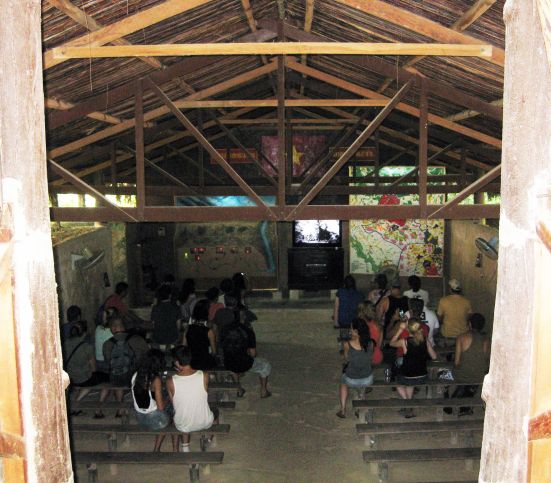 Nearly the entire time, the man next to me was really going after his big toenail. I finally took a picture of his struggle – flash went off and everything. I’m going to start taking pictures of people being gross. Here it is small as to not gross you out too much.

Trap door We took turns going through the trap door to the room below. The opening was barely the length of someone’s foot. I was sure the big guy here was going to be stuck. He was flush with the opening all the way around! The lid was a wooden plate they’d cover with surrounding damp leaves; it had 2 small ropes to lift it up. At some point, the enemy became aware of these holes, and they’d open them and shoot them up inside. In response, the VC turned some into traps, which would explode when opened.

Dog Traps Dogs were used to sniff out the underground tunnels, so in response the VC set up and put food in these dog traps. Hinged in the middle on a swivel like a see-saw, soon as the dog stepped on either side, it’d drop him down onto one of the stakes beneath. (Poor doggies.) 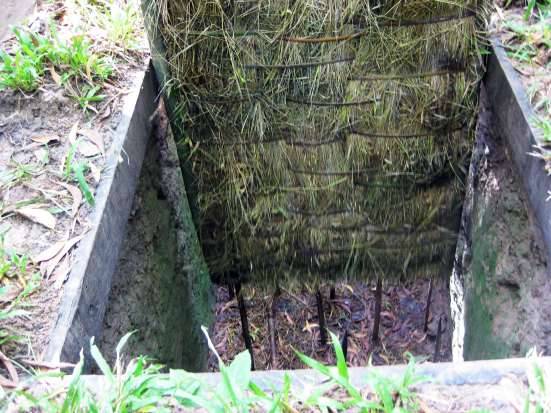 Fake Ant Hills These mounds can be seen all over the place and served as ventilation for the tunnels below.

Delay Mine The gun-part of tanks were made to be indestructible, as the land mines would explode on that part of the tank. In response, the VC made delay mines, which would explode several seconds after activated. This tank says, “American M41 Tank was destroyed by a delay mine in 1970.” 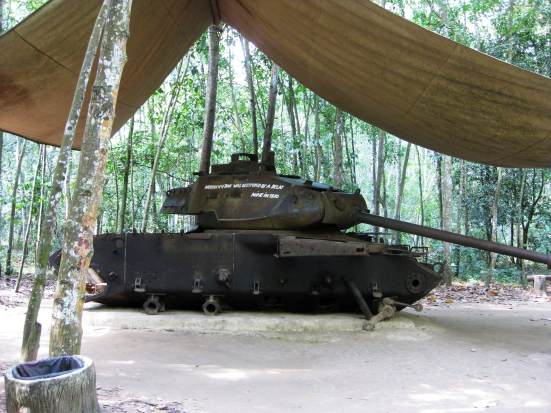 Ho Chi Minh Sandals These sandals were narrower at the toe than at the heel, so footprints looked to be going in the opposite direction. They were made from old tires. 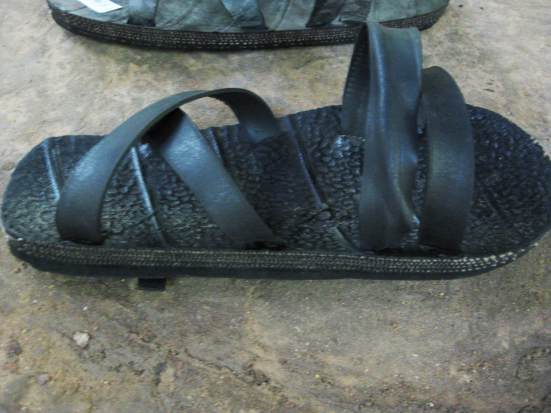 traps Here’s Trang explaining how each of these 7 traps work. Basically, you step on something that looks like the ground, then bam! There’s spikes all in you and you can’t get out. The ones here were: sticking trap, clipping armpit trap, rolling trap, window trap, folding chair trap, fish trap and see-saw trap. 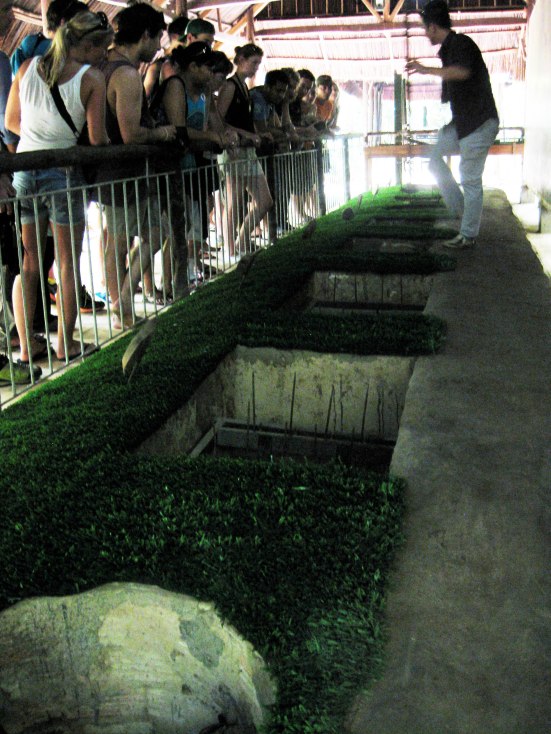 100m tunnel There’s 100m of tunnel available to crawl through. Every 10m there’s a passage back up in case you get freaked out. I’ve never been claustrophobic, but I only made it 10m.

In the documentary room, we saw a cross-section, subterranean model of the tunnels. The tunnels were created in 3 levels of depth, with no talking on the topmost level. The enemy would put ears to the ground, hear where they were and bomb that area. Long, winding chimney-vents would channel smoke from cooking to areas where morning fog was thick. Cooking was only done in the morning so the airborne evidence would blend with the fog.

Bombs Here are some US Army bombs and shells.

Trang Only later did I realize that I didn’t get a photo of Trang! The closest I have is of him here in the background of the sleeping man. He’s in the purple shirt and light gray pants. 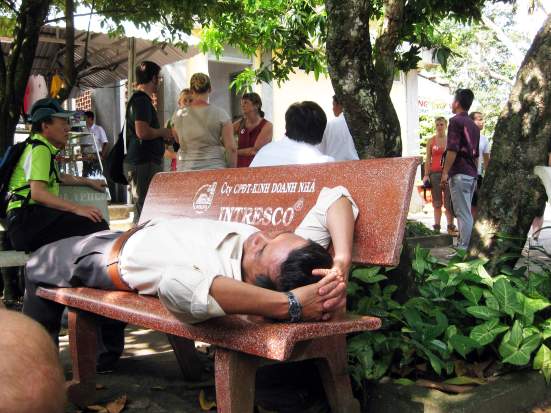 Some random pics I took on the bus to Củ Chi: 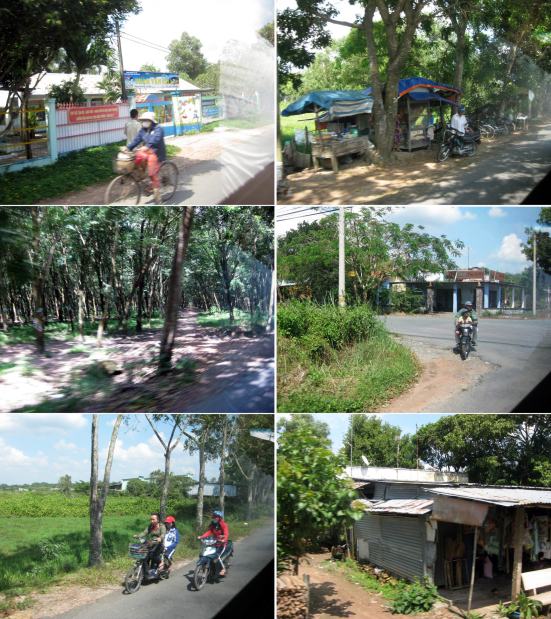 The Return We could opt to take a boat back to Saigon for $13, so I did. About 20 minutes down the river, some Vietnamese military motor boated up to us and told our driver that we couldn’t pass because they were doing naval tests until 6pm. I have no idea what this means, but we turned around, were given our money back and put on a bus back the way we came. Here are some pics of the boat ride that never happened. (Including a spider along for the ride. What kind of spider is that?? I could have posted a closer-up pic, but Chip reads the blog and she hates creepy-crawleys.)

Remember the crazy Tasmanians I mentioned in this post? Well, here they are. I wanted to take a pic of just them, but they insisted I be included. For the bus ride back, 6 people had to volunteer to take a “local  bus” because of space. (So subtract the AC and add chickens.) Guess who volunteered so the rest of us could ride home in AC comfort. These guys! 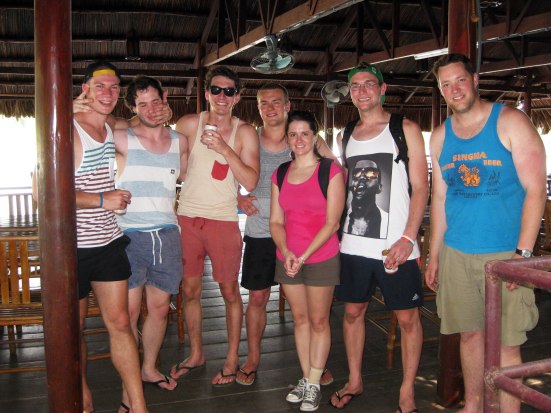 One more thing I saw on the bus ride back that made no sense. How did this big rig even get here?! It’s from New York! I see online that the company’s out of business, but still doesn’t explain why the truck is here in Vietnam.