I knew that a night out with a bunch of expats might be the end of my experiment, Obamney 2012. In the end, I didn’t find out from TV or internet, so mission accomplished. It was this old coot! 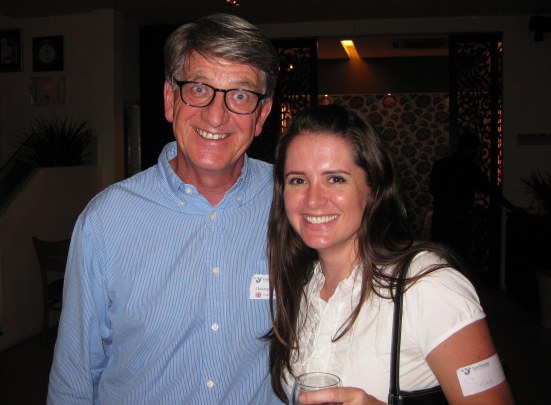 Of course I found out from this wily Aussie! Just look at him – does he look like the type to keep a secret?!  I’d probably been talking to him for about a half hour – his son’s a ski instructor in Niseko, Japan and his daughter lives in Scandinavia someplace. He asked where I was before Hong Kong and I said “Ohio.”

“Oh, did you vote in the recent election?”

I said, “Actually I’m not that interested in politics,” hoping he’d move on. But no.

“You know, a friend of mine was watching Obama’s acceptance speech and…”

“Ack! We have to get a picture!” And we grabbed the nearest person and made him take this picture. Then I explained, that I actually hadn’t known who’d won (and had partially convinced myself that it was Romney.)

The event was through Internations, an expat group Jill got me into. I had to hop on the subway during rush hour to get there, where I caught a double-sighting of stripes (on the left) and a smartphone buffet with a side of glaring-guy (on the right.) Whatever, glaring guy! You don’t intimidate me!

I was headed to this place: 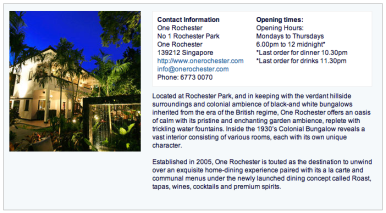 to meet up with this guy from last weekend. Cover was $25 SGD ($20 US) Eek! Told you Singapore’s an expensive place to go out! 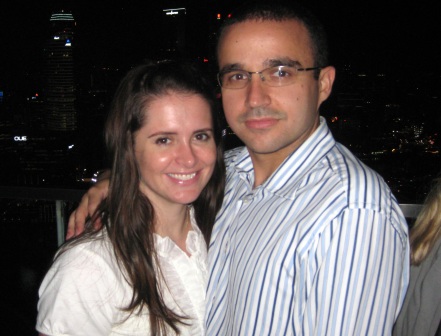 Part of the reason I wanted Obama to win is because of $150 I bet that he would win. No word yet on any money coming my way, but look at this exchange from October 20. Do you think I’ll get my $150 from Ted? 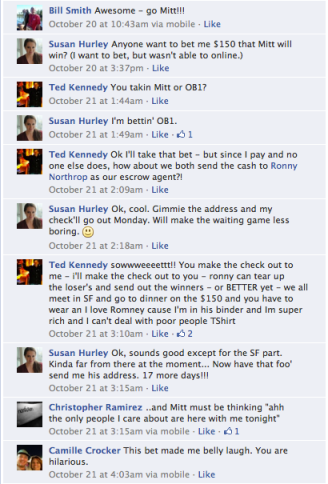 After One Rochester, we headed to Ku De Ta, at the top of the Marina Bay Sands Hotel where I took this pic:

I came into the living room this morning to see Neko sitting in the chair like this. I think it’s election-related; he hasn’t fully processed the Obama win yet. Neko, snap out of it! You live in Singapore and you’re a cat! 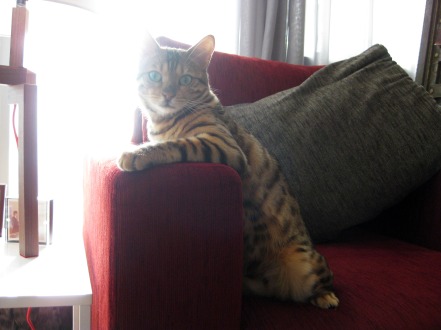 First thing I did was watch the November 7th episode of The Daily Show, and it did not disappoint. Go Jon Stewart!