I love dispelling myths, but I haven’t run into too many regarding Lima. Here are the only two (brought to you by friends in the States):

Myth 1: Lima’s at some crazy-high elevation.

Reality: Lima’s at sea level, but hilly as you go inland. Highest point is around 5,000 feet, but still. It’s basically at sea level. Here’s a photo I took in the Miraflores district, close to Larco Mar: 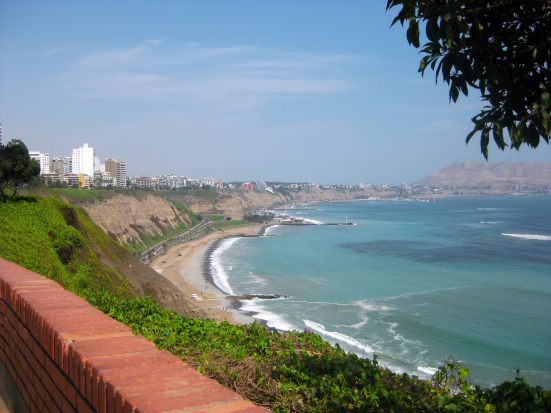 Myth 2: It’s beautiful over here! (Granted, the above pic ain’t bad but…)

Reality: Lima’s in the middle of a dusty, dark brown desert. Any “green” you see has been planted here and needs watering. At 3 times the size of California, Peru offers virtually every climate that exists. But around Lima, the enormous brown hills of fine, dark “polvo” that look more like construction sites than anything. I’ve never managed a good photo – I’m either in a car or the garua is making the air too hazy. (There’s usually a heavy mist (garua) in the air, from warm desert winds interacting with the cold ocean. The Humboldt Current from Antarctica makes the water colder than one might expect.) This photo I found here is a good illustration of what I’m talking about:

How you are seen, so you are called. There’s an Asian associate where Fiona works who everyone calls “Chino”. Not because he asked to be called Chino, but because he’s from China-area, of course! Fiona’s often referred to as “blanquita” because hey, she’s white! Kind of reminds me of Michael Scott in this lo-res clip. (“…shirty, mole, lazy eye, Mexico, baldy, sugar boobs, black woman…”)

I see white people. I have yet to see an ethnic Peruvian in an ad. All the billboards, print ads and tv commercials feature people of European descent, not the shorter, darker locals that make up the majority of the population.

A reader sent me this post featuring this ad asking for an at least 5’3″ (160cm) receptionist with white skin (“tez clara”):

So you non-European girls, fuhgettaboutit!

Negrita Brand Finally, we have “Negrita” cornstarch and chur-something; I suppose the Aunt Jemima of Peru. In all fairness, the top post here on urban dictionary maintains that “negrita” is endearing and not offensive. Like Chris Rock says here (at 2:24), “It’s not the word. It’s the context in which the word is being said.” 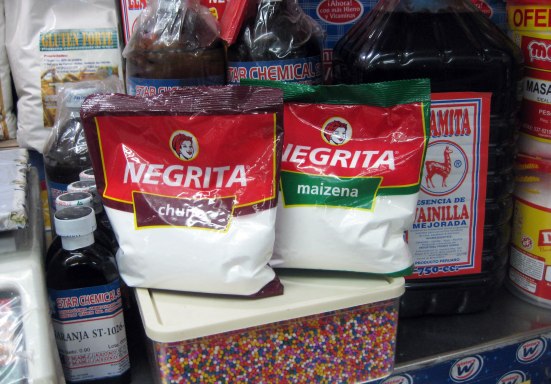 (Asking for a non-dark, non-short receptionist though? And in a place where the majority are not that, no less! That’s bold. )

Ankle Biters I know a 5-year old who can’t take compliments! I said to him, “You’re so cute – do people tell you you’re cute?” Robotically, he quipped in his little voice, “Leave-a-mes-sage!” The 10-year old has a more complicated method of deflection. She turns her back toward me, shakes her hips and shouts, “Talk to the booty cuz the hands are on duty and the face just doesn’t wanna hear it!” I’m gonna miss these crazy kids.

Pano It didn’t fit into any other posts, so here’s a panoramic from Fiona’s office window in San Isidro (Lima.) This would look way better if I were an art director, but I’m not. This is the best I can do: