I WANT IT: BBQ CHEESE!

This stuff is genius and delicious! In the US, we throw all kinds of stuff onto the grill: hamburgers, hot dogs, portabellos, corn-on-the-cob and other veggies. Why not cheese on a stick?! Obviously they make it so it doesn’t melt/stick to hot surfaces and if you eat it soon enough…Mmm melty!

PERU CAN KEEP IT: BAGS OF MILK

We’ve racked our brains trying to figure out a benefit to a bag of milk over a carton of milk. The marginally lighter weight hardly makes up for these awkward, often-punctured-in-transit, milk-instead-of-water balloons. To dispense properly – or at all successfully – one needs to buy one of these patented Milk Bag Holders: 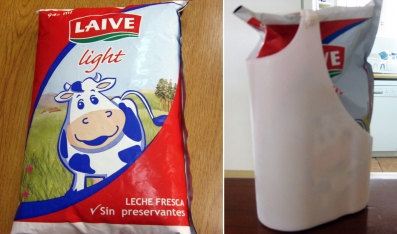 I just don’t get it. How is this better for anyone than the clever cube-shaped-carton or jug that one finds everywhere else in the world? Btw, the milk pictured is a 1-quart bag.

Oh! The mayo and ketchup are also in bags, which isn’t as bad but whose advantage eludes me. Pictured: 14 oz. 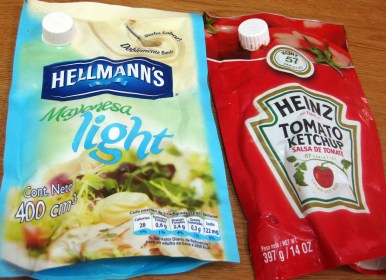 How good did that BBQ cheese look?! What’s an example of something you’ve had abroad that you wish we could get in the US? My answer: Schweppes Bitter Lemon.

**BONUS** A reader in Canada sent us this pic of the type of milk bag container that’s been used there for decades. Milk-In-A-Bag – who knew it was so widespread?! Thanks, Andrew!

9 thoughts on “Dairy section: What Peru Can Keep and What I Wanna Take!”