A friend just popped up on IM and asked, “Are you still in Nam?” which immediately annoyed me. Does he think that sounds cute or better than just “Vietnam”? If you want to call the U.S. “‘Murica” to convey a tone, fine. But what’s the point of calling it “Nam”? I replied, “I’m not answering that” and blocked him. (Which only means I’ll appear to him like I’m not online, until I unblock again.)

Maybe I shouldn’t be online at all when I’m in a terrible mood, but here I am. Blogging of all things. (What could go wrong?)

Work. Today at work, my friend Vinai asked, “What’s wrong with you – you’ve been looking so miserable for days.” Really, I am. I have 5 more workdays until the end of my contract. I like my creative director, Patrick, and my friend, Nhung, but this Friday will be the last day for both of them. Patrick’s relocating to Shanghai and Nhung’s going to work at another agency here in HCMC. I have the option to come back in March and continue working at the same agency, but I really don’t want to. There’s no huge, compelling reason of why I don’t like it. I just don’t.

Regardless of any accuracy in what he was saying, why was he talking to me about this? Honestly, I don’t even know what points he was trying to make. Thankfully, the conversation switched to traumatic head injuries and I found out that he’d been in a horrible car accident when he was 15 and had been in a coma for 6 months. He knew far too much about comas to have been making it up. I felt bad about wondering if our crazy political “conversation” earlier was the result of this guy’s head injuries.

Another time on expat alley, I was having a decent conversation with a chick who’d come here with her fiancé. They’d broken up a few months ago after he cheated on her with an out-of-town houseguest. We kept our voices down, as he was sitting at the next table. Seems that neither of them wanted to relinquish their hang-out spot, so there they were. Ignoring each other. But don’t worry! She’s about to leave Vietnam to be with some guy in Cambodia. She’s not the first girl I’ve met down in the alley who seems quite focused on dating and guys and all that.

While she and I were talking, some obnoxious Vietnamese/American guy kept hocking and spitting – it was pretty gross. At one point, he took a break from that to make fun of her Australian accent. She had made an exclamation that began with “Dude…” and he mocked her “dude” about a dozen times. Seriously, he just sat there like a parrot saying, “Du-ude. Du-ude. Du-ude.” I think he was hoping for a reaction, but she never gave him one. I made a mental note to never talk to this guy, ever.

One of the American expats down there has lived here a few years and is basically a gusher, going on and on about how fantastic Vietnam is. When asked for specifics, he just vagues it, “Oh, are you kidding – the food, the people…. Everything’s so cheap here…” Ok, great.

One good friend. If not for Nhung, I probably would have left by now. Sophie and I moved in opposite directions from where we started out, in Pham Ngu Lau. Now she lives near the school where she teaches. We’re going to get together next week, but that’ll be the first time I’ve seen her since I moved from the backpacker area. From her emails, she sounds like she’s enjoying it here.

Pics from Sunday. Nhung picked me up and we rode around a bit last weekend. Here we are at the nail salon. I find it amazing how many people are packed into either side of that alley. Next, is a bride getting some pictures taken. I thought the pigeons walking on her dress were kind of gross. I asked Nhung, “Where are all the doves? She needs doves!” Nhung laughed and said something about there not being tons of doves in Vietnam. Finally, here’s Nhung expressing her bewilderment over who would leave a water bottle on her moped. See that sweet pink helmet with the white star? That’s mine. (How cute is Nhung’s iphone case?!) 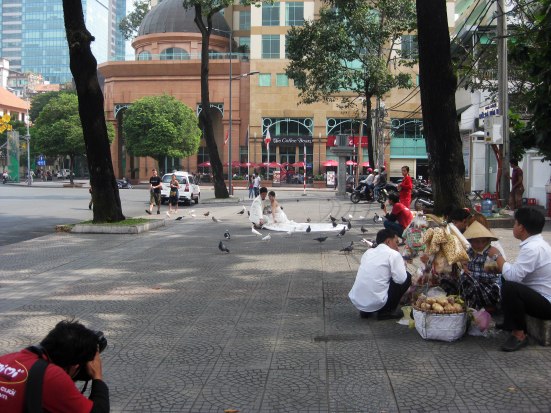 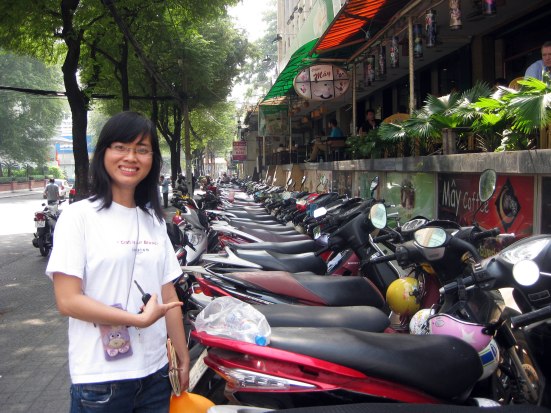 February 17: Fly to Telluride for snowboarding.

…and I don’t know when I’m leaving Telluride yet. Maybe NEVER!