On the bus to Trà Vinh, I saw an ethnicity I hadn’t seen before. He almost looked Indian: very dark skin, round eyes and thick, straight, black hair. Later on, Nhung and I were walking around this pond in Trà Vinh, near her hometown, when I saw another one. “What ethnicity was that guy?” I asked. She said he’s Khmer, but the Khmer on google images look more Asian than Indian. (And yes, Indians are also Asians, as India is in Asia – just play along.) Here’s a pic of the pond Nghia took with his iphone:

We went to visit the Khmer Cultural Museum, but it was abandoned. We walked through the open gate, wandered around and  found some squatters’ beds inside. Judging from this post from last January, looks like the museum closed fairly recently. 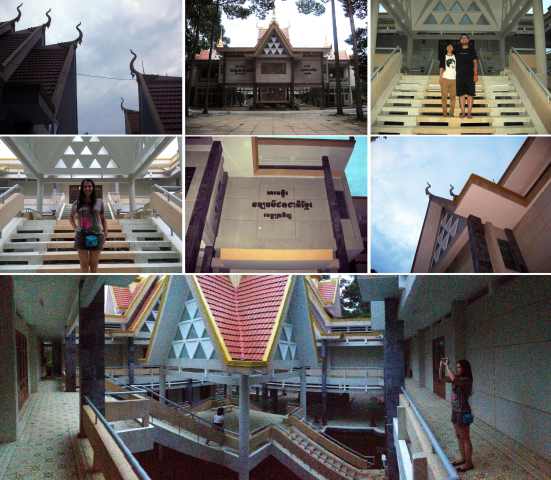 I love hanging out with Nghia and Nhung (pronounced Nyeah and Nyom.) She’s one of our Vietnamese copywriters, a language nerd like me and her English is great. Her boyfriend, Nghia went to school in Sacramento for 6 years, so he’s practically Californian. We 3 spend a lot of time talking about our two countries, which I enjoy.

The evening I got to Trà Vinh we went with her dad to eat at his friend’s outdoor seafood restaurant: 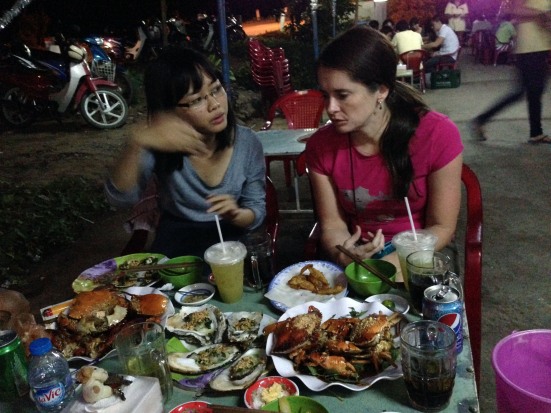 The next morning we went to Nhung’s family’s place in the countryside. They weren’t getting together for Christmas, but for the anniversary of her grandmother’s passing. Just about her entire family was there and I’m the only American most (if not all) of them had met. Before we left, her uncle pulled her aside and asked her where I was from and how she knew me. When she told him we’re coworkers, he asked, “But you work for an American company. Don’t they have companies in the US where she can work?” In his mind, someone would only resort to working in another country if all other options had been extinguished.

I would have loved to have taken some pics, but it would have been super awkward. Here’s a pic Nghia took of Nhung and me in the backyard. Their rice field is in the background and the basket is actually a potty where everything drops down for the fish to eat! (Yes, Nhung is standing in the toilet explaining how it works. Love that girl! haha.) 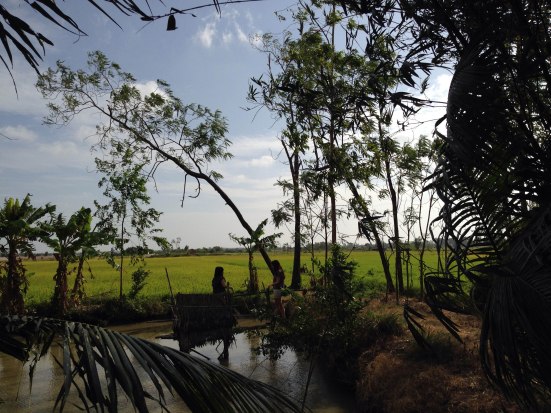 We took a 4-hour sleeper bus back to HCMC for $10. With some inane talk show blaring, I don’t know how anyone could sleep. I even had my crazy-lady earplugs and couldn’t sleep. Even in Vietnam, the cool kids are at the back of the bus.

One thought on “Trà Vinh, Nhung, Nghia and the abandoned Khmer Cultural Museum”