The backpacker area of HCMC, is loaded with dozens of travel places whose agents mill around the streets and beckon people to come take one of their many tours all over Vietnam: by bus, boat, train, plane and motorbike to virtually anywhere. The Mekong Delta is just a few hours away and a popular tour destination.

A good way to get from Saigon to Phnom Penh. A number of people on my tour just wanted to get to Phnom Penh more interestingly, and even more cheaply, than a direct bus or plane.

“Must-see”? Nah. A few weeks ago, I met a very nice Lutheran minister and his 24-year old son from Wisconsin at my hostel. They said of their Mekong Delta tour, “Oh sure, it was touristy – they all are. But you have to visit the Mekong Delta. You shouldn’t miss that” I don’t agree. I don’t regret going, but could have skipped it.

So which tour to take? After visiting several travel places and later, going on the tour, I can confidently say: They are all the same. I’ve heard that all these travel places are really just one company presenting itself as different ones. It’s really not hard to believe. Here are some of the brochures I picked up: 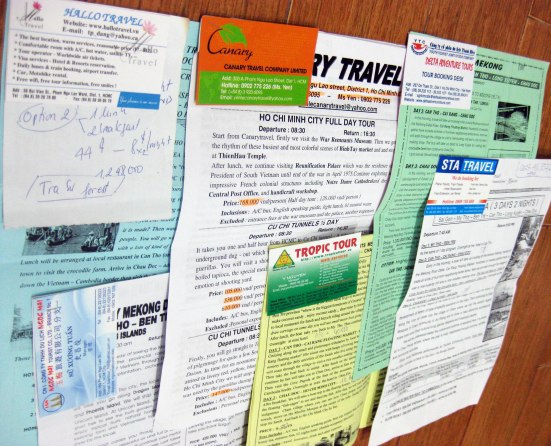 Keep your expectations low. At around $20 for the 1-day, $35 for the 2-day (including overnight stay), and $60 for 3-day (includes two overnight stays), one shouldn’t expect 5-star anything. Far from it. Every place we went seemed well-worn with a steady stream of tours. We saw several other groups doing the same things we were. At times, we felt like our tour guide was making it up as he went along. For example, we’d overhear him on his phone saying things like, “I got 30 – no, 40 or so people here… can you send a bus over?”

I took this from inside the travel place (I went with Delta Adventures) waiting for our 7:30am bus to arrive: 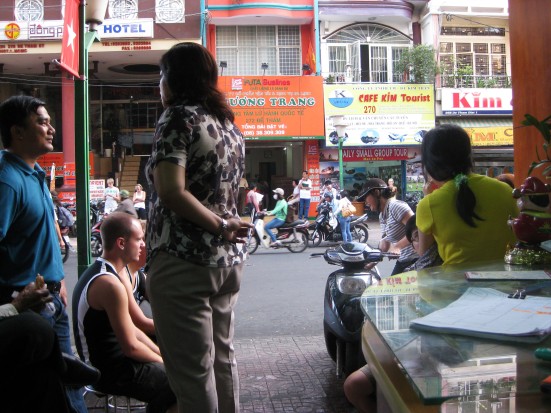 Here’s a map they have on under the glass of the counter:

What’s on the tour. Over the 2 days, we visited various places that produce various things: coconut candy, some specific kind of honey, rice noodles and rice. Tons and tons of rice. A person who really likes seeing how stuff gets made may love this. As for me and others on my tour, we were like, Oh ok. Yep, there’s the thing… attached to the other thing. Ok, got it.

Here are some pics from those places: 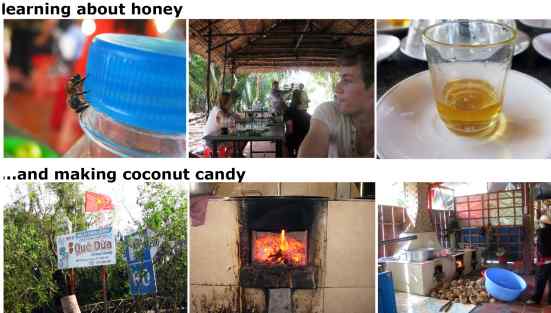 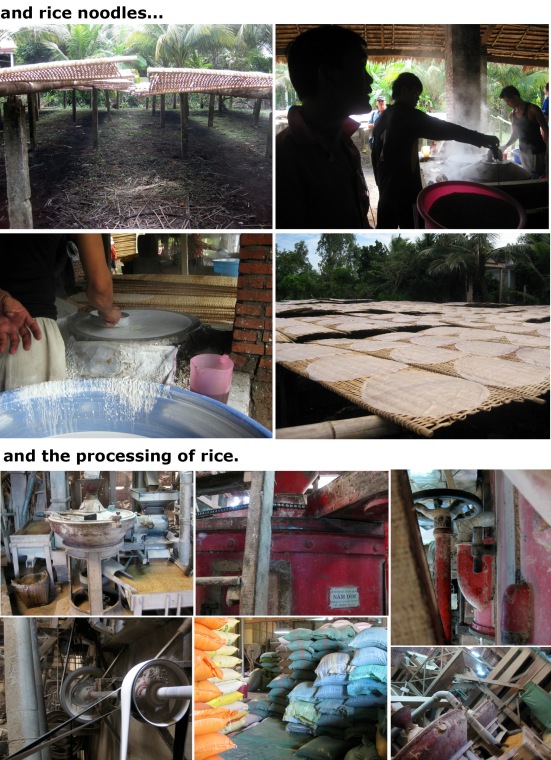 The Machinist from Australia. (video!) This guy on our tour could tell you how anything worked as soon as he saw it. Here he is explaining the rice noodle processor.

Floating market. Such a big deal is made of the “floating market”, I was imagining weaving through a wide array of boats selling everything: postcards, clothing, handbags, food, drinks, exotic pets. Um…it wasn’t like that at all. Some local people motored up to our boat to sell us coffee and various fruit like pineapple and pomelo, but that was about it. I didn’t see what all the fuss was about. It was nice to be be on the water, just chilling and talking to the other passengers, but the floating market didn’t do anything for me.

Choose the homestay NOT the hotel. The tour booked us at the Xuan Mai hotel in Can Tho and it was g-ross. I didn’t take pics because you don’t need to see that! Here’s a sampling of what some from my tour group had to say about their rooms there:

• Middle-aged Australian couple: Filthy! Filthy! I didn’t even want to lie down in the bed. The AC wasn’t working so he checked the filter and it was caked high as if it’d never been cleaned. We rinsed it and put it back, then it worked.

• Thirty-ish German couple: Something was dripping in our bathroom from the bathroom above. I don’t want to think about it.

• Me: Very dirty white towel serving as the bathmat. (If you’re going to go white, you’d better keep it clean.) Some hairs on the floor. Overall icky feeling. Glad it was only one night.

The Australian couple heard that the floating hotel is even worse than the hotel in Can Tho, so be aware of that if you stay a 2nd night. Our tour guide, Phu, was just too hard for me to understand most of the time. He accidentally said “Ladies and Germans”, which was funny because our tour had an unusual number of Germans. Overall, it was ok. I met my coworker, Nhung after my tour and liked that part of my Mekong Trip much better, but I guess that’s to be expected.

Check out the rest of my pics from my Mekong Tour in my gallery in this post.