On our 45-minute ride home from the airport, Fiona’s husband gave me lots of great info about my new home. Here are 8 that stuck out:

• Mail doesn’t exist. What country doesn’t have postal service?! Peru, that’s who. Fiona and her family uses the US Military mail (APO) because of their employment. They have DHL and FedEx here, but normal mail service doesn’t exist and apparently, never has.

• Bad parts of town: all of them. Especially for pale people like me. There are basically 4 safe areas; the touristy Miraflores and business district San Isidro being two of them.

• No beach action. The beach here is not sandy but rocky with chilly water from a current that comes up from Antarctica, the Humboldt Current. There’s surfing, but wetsuit only. A beach trip requires a some time in a car first; about 45 minutes from our place here in Lima.

• Worst thing: traffic. It’s like Vietnam but with cars instead of motorbikes. Too many cars for too few roads. “Crazy” driving which is rare in the US: stopping wherever, not driving within lines, bobbing, weaving, and driving the wrong direction. Note to self: If I get a job here, I’ll get an apartment within a 1-mile radius.

• Thrice the size of California! But with roadways equal to Rhode Island. If Peru were a US state, it’d be 2nd in size and population. (Only Alaska and California would have it beat, in population and size respectively.)  I like plotting things on a familiar scale. Size-wise, Peru is almost twice the size of Texas (but still smaller than Alaska) and with 29 million people versus Texas with 26 million.

• No public transport for me. Locals can take mini buses that dart perilously through the city streets, but gringoes on mini buses are asking for it. Teenage relatives of European-descent locals sometimes come here over the summer and despite warnings, insist on riding the local mini buses. They return home with slashed bags, missing wallets and generally harassed. So none of these for me:

* Local tension. There’s some tension between the ethnic Peruvians and the European descendants. For years (decades? centuries?) the descendants of European settlers were the main group who lived in Lima, while the indigenous people lived out in the country. Over the past few decades, education has become more available and indigenous people have moved into the city like they own the place! 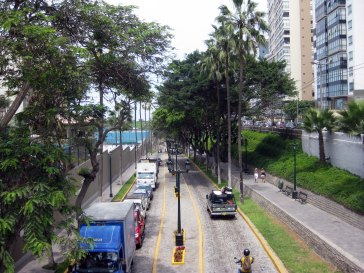 One thought on “First 8 Things I Learned About Peru”